Job security has vanished. Time to take the next step

Working people are scared to death. Job security has vanished. Temporary employment soars. Wild technological changes are still picking up steam. And global competition–for my position and yours–is a way of life from now on.

Some people are responding, from the Russian steppes to Paris’s arrondisements, by voting for radicals who promise to close the borders and turn back the clock. Some are pulling up their turtlenecks and hiding beneath their desks, in hopes that the bearers of the next list of job cuts will overlook them somehow. 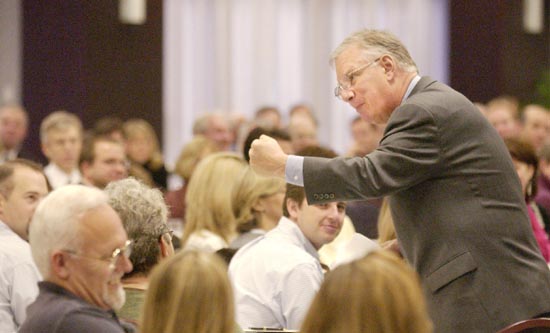 And some are taking their destinies into their own hands, and discovering matchless opportunity amid the turbulence.

“People do realize that job security is gone,” wrote Professor Homa Bahrami, of the University of California at Berkeley, “but many don’t realize what it’s been replaced by. The driving force of a career must come from the individual, not the organization.” Smart individuals on corporate payrolls are beginning to act as though they were independent contractors. Bahrami quotes a saying at perpetually volatile Apple Computer: “Your sense of job security lies in your employability.”

The wise employee, with the mind of an independent contractor and an eye on her or his market worth, works each day at developing contracts on or (especially) off the company payroll, improving skills, and delivering services that are of demonstrable value to “customers” inside the organization or out.

But a growing number of workers are going the next big step and saying, in effect, “Hey, the lot of the self-reliant individual, on or off the payroll, isn’t all bad.” Enter Claude Whitmyer and Salli Rasberry’s Running A One-Person Business. I came across it two years ago in a variety store in Occidental, California. I started reading it as my wife, Kate, drove us up the Northern California coast. I kept reading her longer and longer excerpts. I was hooked in a flash.

“For those who feel life is more than making money, the one-person business is an exciting form,” the authors, who have advised hundreds of one-person business enterprises, begin. “It is business as lifestyle–business as a statement about who you are and what you value.” The book is a fabulous testament to creating a rewarding lifestyle through your work, whether as a gardener, physicist, or dressmaker. It’s also a no-nonsense, one-step-at-a-time primer to getting there from here.

Though Whitmyer and Rasberry emphasize the humanness of the one-person enterprise, they spare no detail in helping you set up a book of accounts, draft a business proposal, or make the decision about whether to use an answering machine or an answering service (the importance of first impressions and all that). In fact, believe it or not, the authors go a long way toward helping the nonnumerate realize that installing and using simple financial control systems can actually be a kick.

British business consultant Charles Handy is rated by many (including yours truly) as the most thoughtful observer of tomorrow’s workplace. The new career, he claims, will typically consist of several mini-careers, on and off the company payrolls. I’m certain Handy’s right. Hence this book’s value for the current corporate denizen with an eye on tomorrow, as well as the pioneer ready to make the jump.

But the fact is, I think the greatest rewards will accrue to those who are already struggling to make it on their own. I’ve been in business for myself for over a decade now (though my company’s payroll is a bit more than just me), and I can tell you that I learned an enormous amount from Running A One-Person Business. I just wish I’d had it on that lonely day in November 1981, when I first wiggled out of the corporate cocoon and began my liberating adventure.

Copyright © 1994 by Tom Peters. All rights reserved. Originally published as the Foreword to Running A One-Person Business (Ten Speed Press, 1994). Permission is hereby granted to link to this page, but not to copy or reproduce this content in any form electronic or otherwise.